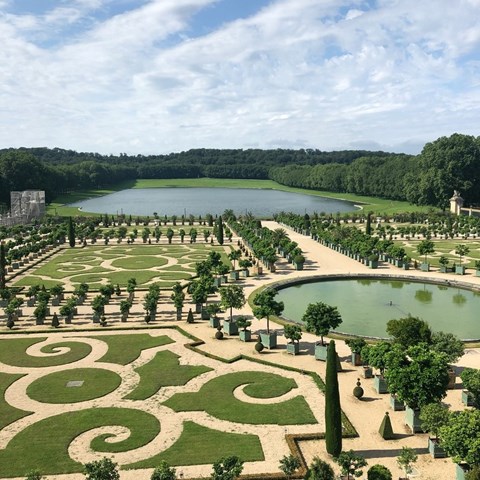 An exchange is an exciting roller coaster. My six months in France gave me unforgettable memories. Meeting a different culture and living in a new context gave me invaluable experiences both personally and academically.

Why did you want to do an exchange?

I had been to shorter language courses abroad before. I really enjoyed these experiences and I had my mind set on an exchange sometime during my master. I hesitated which country I wanted to go to but since I had been studying French and wanted to improve my language skills I chose between the exchange schools in France. I applied to École Nationale Supérieure de Paysage (ENSP) in Versailles. I was intrigued by the historic site and the short distance to Paris. It’s situated in the King’s kitchen garden (Potager du Roi) close to the famous Castle and Gardens of Versailles. It’s an art school with only landscape architecture students, which was another reason to why I applied to the school.

Which courses did you take?

One difference with the school system at ENSP compared to the landscape architecture program at SLU is that you read many courses at the same time. I took the courses that belonged to the first year of master, second semester. To follow the same schedule as the rest of my class was comfortable but I wasn’t free to choose courses after interest. For example, I had a course named Enjeux paysagers, acteurs et politiques that focused on landscape policies in France and it was a continuation from the semester before I came. Another course called Infrastructures et déplacements was a technical compliment to the studio class. The studio course (Atelier) ran through the entire semester. We had site visits and presentations during the semester and the big, final presentation was an individual large scale design project. I had four art classes. They were held both outdoors and in the atelier. I had a gardening class, Jardinage, in the school’s garden. I also had an Ecology class, Lisière et espace ouvert. All the classes were taught in French apart from a two week long English workshop. The workshop was a group project and during my semester it focused on the shift to future energy systems in the landscape. The last course of the spring semester was to do a two-month long internship. I did my internship at an architect and landscape architect agency in Paris. The internship was very inspiring and a perfect way to end my exchange experience.

What was the student life like outside of your courses?

I lived in a student house in a student area called Cité Internationale Universitaire in Paris. The area is situated in the south of Paris and can be described as a big park with several student homes representing different countries. I lived in the house for Swedish students. About fifty percent of the residents in my house were Swedish and the other half from all over the world. I began the semester in February and Paris was under many restrictions because of covid-19. However, we had a social life in the house even during lockdowns and curfews. As residents, we could also be in the park outside the house a bit longer than curfew.

During the spring vacation in April, we were not allowed to move for more than 10 kilometers outside of our homes. I took the bike to Parc de Sceaux, a park designed by André le Nôtre, the same landscape architect that designed the gardens of Versailles. When spring came to Paris I visited as many parks as I could. Luckily there are many of them in Paris and they were open to visit. Some of my favorites are Jardin des Plantes, Parc Andre Citroën, Palais-Royal, Jardin du Luxembourg and Square du Vert-Galant.

During June and July I was fully vaccinated and could visit museums, cafés, restaurants and festivals. In Paris, all the museums are free for EU citizens under the age of 26. There are good opportunities to travel by train in France. I visited Marseille in the south of France and Lille in the north. I also went to Brussels during a weekend.

What was your best experience during your exchange?

The best thing with the exchange was meeting all the people from the school, the house and the internship. I practiced a language at the same time as my understanding for landscape architecture has grown.

What was the biggest challenge during your exchange?

The system was different when it comes to organization, presentation and teaching. It takes a while to adapt to the new system and it’s your own responsibility. I was the only Erasmus student but there were two other international students in my class.

In the beginning of the exchange, it was challenging to exercise the language. Wearing face masks could also be difficult in terms of understanding and communicating. Since I lived in the student house with people from all over the world we often spoke English but I could also practice French with them. For instance, we had dinners were we only spoke French.

To manage with the classes, you must understand French on a relatively high level. You should be prepared to hold presentations and write in French. It’s not easy to adapt to a new school and a different system but try to go with the flow. Ask for advice from the people who know the school if you need help. The benefits with an exchange significantly overweigh the challenges! For further questions: pidn0001@stud.slu.se