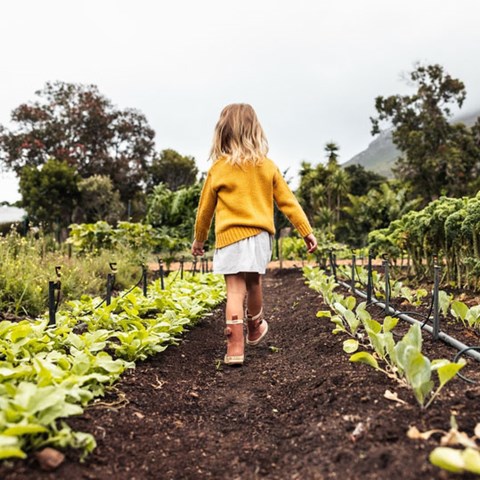 Agroecology is described as a locally based, often small-scale way of conducting agriculture, in harmony and in collaboration with nature itself, with circular thinking, biodiversity and sustainability as guiding stars. But can we feed the whole world with such agriculture? Listen to some voices about agroecology, in Swedish, in the latest episode of the podcast Feeding your mind from SLU Future Food.

Agroecology is a contemporary word - but what does it really mean? As a science, agroecology is "the study of the ecology of the entire food system". As a social movement, it is a counter-movement against large-scale conventional agriculture that requires fertilisers and chemical pesticides.

- The concept of agroecology includes both science, concrete production methods and a social movement that is a counter-reaction to the dominant, conventional methods for large-scale agriculture with many inputs such as commercial fertilisers and pesticides, says Georg Carlsson, professor of sustainable cultivation systems at SLU in Alnarp. He is also the programme director for the Master's programme Agroecology, where Joar Löfberg is one of the students.

- I thought about what is really important in life, and one of the most important things is food! Agroecology connects me to the earth, because food becomes a part of me as I eat it. It feels like a holistic way of life to think agroecologically, says Joar Löfberg.

But from a purely scientific point of view, can one say that agroecology is good and conventional methods are bad?

- It is a very rough simplification, but at the same time largely true - because there are important central problems in the conventional way of producing food on a large scale as we do in the rich part of the world, says Georg Carlsson.

- It is one thing to look at how we can produce food for a couple of hundred more years, but how can we produce food in a way where we can survive for thousands of years? What is sustainable food production? These are questions that I link very strongly to agroecology, says Robin Meijer, former student in the Master's programme Agroecology at SLU and now a doctoral student at Chalmers.

There are several goal conflicts and a lot of unanswered questions about agroecology. Perhaps the sharpest criticism is that agro-ecological production methods would not be able to feed the entire world population, with the smaller harvests that can accompany a system change. But with the right combinations of different plant species, you can achieve synergy effects and get better harvests than today, says Christina Lunner Kolstrup, researcher at the Department of People and Society at SLU in Alnarp. And regardless - we cannot continue as before, she says.

- The long transports, for example: when we fish shrimp off Greenland, send them to Russia to be peeled, to China to be packed and then back to Europe. And we consumers want bananas, melons and peppers all year round. It is simply not sustainable in the long run, if we want to live on a healthy planet.

Hear more in the latest episode of the podcast Feeding your mind: Can agroecology feed the world? (in Swedish)

The United Nations Food and Agriculture Organization (FAO) has identified ten elements that define agroecology; and among them are resilience, synergy effects, human and social values, circular and solidarity-based economy, diversity and efficiency. The concept of agroecology includes science, production methods and a social movement; and everything strives for long-term sustainability. Agroecology is thus a counter-reaction to large-scale, conventional food production, which is often about monocultures, long transports, extensive use of fertilizers and pesticides.

FAO: What is agroecology?

At SLU in Alnarp, you can study a Master's programme in agroecology.

Listen to all the episodes here.